Large Stone Post measuring 7ft tall. We have two available that are very similar so could be purchased as a pair, please enquire.

Stone posts historically had a variety of different roles but most notably they would have been used for Fence/Gate posts, Property markers and Hitching posts. Hitching posts would come in a set with a set of carriage steps in the middle known as upping stones. These steps allowed passengers to safely exit the carriage. If used as property markers stone posts would proudly display the family name on the property land. Stone posts were most commonly used as fence or gate posts especially for farmers as purchasing quarried stone was relatively inexpensive. The rock was quarried and moved to the site where a craftsman would split the stone using traditional methods. Setting the stones apart and setting them into the ground with barbed wire in-between would create inexpensive agricultural fencing, particularly for livestock. 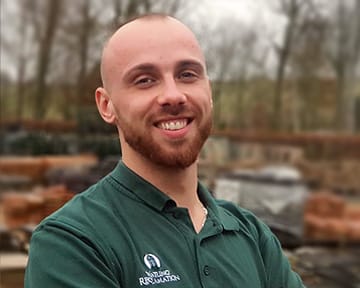 Can't find what you are looking for?

Any cookies that may not be particularly necessary for the website to function and is used specifically to collect user personal data via analytics, ads, other embedded contents are termed as non-necessary cookies. It is mandatory to procure user consent prior to running these cookies on your website.